False Allegations Can Result In Serious Criminal Charges In Seminole 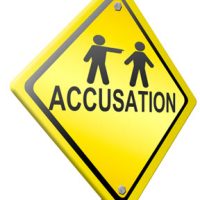 Being convicted on criminal charges in Seminole could leave you facing heavy fines and court costs, a potentially lengthy jail sentence, and a criminal record that follows you for the rest of your life. Disputing the testimony of others involved plays a key role in your defense. In cases where victims or witnesses knowingly make false allegations, they could end up facing criminal charges as a result.

A Seminole man was recently accused of making false allegations against a Pinellas County Sheriff. According to a June 24, 2021 Tampa Bay News Weekly report, the man filed a police report accusing the Sheriff of child abuse. While unsure of his motives, investigators claim the man suffers from addiction and mental health disorders. After making the accusation, he fled to Tampa where he was eventually arrested. He is being held in the Hillsborough County Jail, pending transfer to Pinellas County where he will stand trial.

Unfortunately, this type of case is not uncommon. According to the Innocence Project, as many as 10 percent of police reports filed are based on false allegations while it is estimated that thousands of innocent people are currently serving time based on false testimony. It is not uncommon for victims or witnesses to be unsure of what they saw or experienced in the aftermath of a sudden and traumatic event, such as a crime. However, there is a big difference between filing a police report or making statements based on what you thought happened and accusing someone of criminal activity knowing they are innocent.

False allegations may involve any type of crime, but they are most common when there is a personal relationship between the accuser and the accused. This includes cases involving simple assault, domestic violence, harassment, trespassing, and child abuse or neglect. In order to be considered a false allegation under the Florida Statutes, prosecutors must prove the following:

Penalties for making false allegations have the potential to be severe. Depending on prior offenses and the type of crime alleged, a conviction could result in fines of up to $5,000 and up to five years in prison. The person could also face civil liability for any damage to your reputation or other ramifications that result from the allegations.

Have you been falsely accused of a crime? Reep Coleman & Stubbendorff can take the legal actions needed to hold your accuser accountable and help you avoid a criminal conviction. To request a consultation, contact our Seminole criminal defense attorney today.