What Constitutes Theft Under Florida Law? 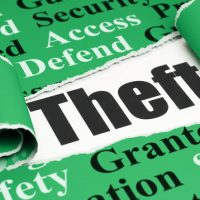 Although the terms theft, larceny, burglary, and robbery are often used interchangeably, the reality is that these are all distinct crimes under Florida law. Unfortunately, the difference between these crimes is often overlooked, which can have serious consequences for those who are accused of a theft offense in Florida. To ensure that you have a thorough understanding of your own charges, please contact a dedicated Seminole theft defense attorney who can advise you.

Under Florida law, theft is simply defined as the taking, or attempted taking of someone else’s property with the intent to either temporarily or permanently:

Florida law also distinguishes between two main types of theft: grand theft and petit theft. The former occurs when someone takes property valued at $750 or more. While grand theft charges fall under one of three different categories depending on the severity of the offense (first degree, second degree, or third degree grand theft), grand theft itself is always charged as a felony. Petit theft, on the other hand, occurs when someone takes property valued at between $100 and $750. Petit theft is a much less serious charge than grand theft, as it is usually classified as a misdemeanor.

Up until a few months ago, the threshold for charging a theft offense as grand theft was $300, which represented the second lowest threshold in the nation. However, after a multi-year effort, reformers were finally able to pass a bill that increased Florida’s felony theft threshold to $750. Although much lower than the originally proposed $1,500 limit, this change represents a step in the right direction toward nationwide sentencing reform.

One of the reasons that many Florida residents have raised concerns about the state’s low felony threshold for theft offenses is that the penalties for those who are convicted of this offense are particularly severe. For instance, defendants who are convicted of the lowest form of grand theft, or a third degree felony, could spend up to five years in prison and be required to pay a $5,000 fine. Even petit theft, which is only considered a misdemeanor offense, could result in imprisonment for up to a year and a $1,000 fine. These penalties, in addition to the creation of a criminal record, can make it difficult, if not impossible, for those accused of this offense to secure housing or find employment in the state.

Because these penalties are so harsh, those who are accused of theft offenses are strongly encouraged to retain an experienced criminal defense attorney who will give them the best possible chance of avoiding conviction.

To learn more about how a dedicated Seminole criminal defense lawyer can help you with your own theft charges, please call Reep Coleman & Stubbendorff at 727-330-6502 today. You can also reach a member of our legal team by completing one of our quick contact forms, or by sending a message to justin@reeplawfirm.com.

By Reep Coleman & Stubbendorff | Posted on October 18, 2019
« What are the Penalties for Driving Under the Influence in Florida?
Misdemeanor Battery Charges »